2022 flips the lid on record numbers 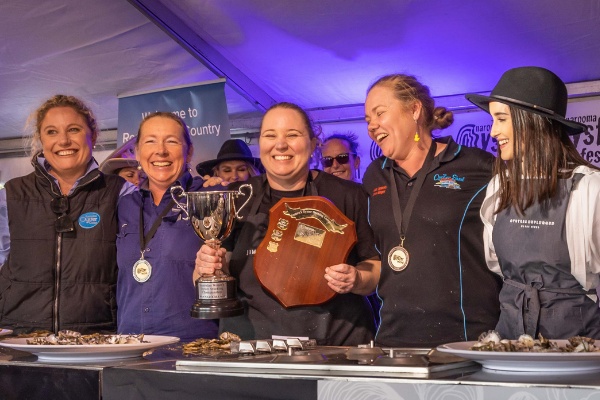 The 2022 Narooma Oyster Festival was the biggest yet, with more than 10,000 oyster lovers flocking to the foreshore as farmers, shuckers and chefs flipped the lids on over 64,000 oysters.

South Coast oysters and produce were the stars of the show as the festival celebrated its 15th year under clear blue skies on Friday evening and Saturday.

Organisers have received overwhelmingly positive feedback after expanding the site for 2022 and adding two more premium dining experiences to the already packed program along with ticket sales at the gate.

There was an all-star line-up of local visiting chefs, the world champion shucker, Stephen Nolan, parachuting into the festival from Ireland and the ultimate race between the nation’s fastest shuckers.

“It’s a huge effort from the community, our volunteers, sponsors and of course the farmers who were on a knife’s edge as rains fell across the whole coastline in the festival lead-up.”

“Of course we had plenty of oysters on the day and were thrilled to see people enjoying and cooking with oysters from five South Coast estuaries along with over 100 stall holders creating a thriving market of produce, beverages and goods.”

“Our own Wagonga Inlet was partially closed, with final confirmation not received until lunch time Friday, just a few short hours before gates opened.”

Farmers came from estuaries north and south of the township, showcasing rock oysters as well as other species including Pacific Oysters and Angasi oysters.

Australia’s Biggest Oyster was a close call after two grande Pacific Oysters came in at exactly the same weight, 2.71kilograms.

Clyde River farmer Kirk Hargreaves won the day with ‘Uncle Ray’ after measurements revealed he was one centimetre longer than Bernie Connell’s ‘Jill’.

Over 100 volunteers help to bring the festival together each year.

“The Clyde River has again produced the biggest oyster in the nation and we like to think the world,” host Paul West said. “Those fellows at Guinness World Records think length is the only measurement worth counting is length but we reckon weight counts too and we might even contend that again this year.”

The Friday Night Warm-up attracted bigger crowds than 2021, while festival goers on Saturday spent the day grazing in Oyster Alley, Ultimate Oyster Experiences, cruising the inlet onboard the Wagonga Princess, feasting at a Seafood Social lunch presented by Merivale and browsing over 100 market stalls from brewers, distillers, winemakers and retailers.

The Narooma Betta Home Living Cooking Demonstration was a full house all day with dishes that featured rock oysters, local fish and beef,

Jervis Bay Mussels and locally grown produce. Recipes will be available on the festival website this week.

By 3pm all eyes turned to the shucking competition, with faces new and familiar lining up to test their technique and speed in front of a roaring crowd.

Four times World Champion Stephen Nolan waited in the wings, ready to take on the festival champions after a big week learning about Rock Oysters and still a bit shaky from a sky-dive arrival at the festival that morning.

The Men’s competition was even closer. Reigning champion Gerard ‘Doody’ Dennis was pipped at the post by one tenth of a second by Clyde River farmer Jim Yiannaros (Batemans Bay Oysters), who shucked 30 rock oysters in two minutes and 39 seconds.

The intensity reached stratospheric levels when World Champ Stephen Nolan approached the bench to take on McLean and Yiannaros in a seriously fun shuck off.

“The shucking competition was a whole lot of fun and the crowd was amazing,” Stephen said. “The Rock Oyster has amazing texture and a complexity of sweetness, saltiness and creaminess, the shell is a little brittle and so it must be handled gently so it looks great when it reaches the consumer.”

Chloe Kay and the Crusade rocked the stage on Friday night.

“My favourite is still the native flat oyster from home, but the rock oyster is next.”

“One of my favourite things about the festival was seeing thousands of people eating and enjoying oysters, I’ve never seen that before and it was really great to see.”

Festival goers can win tickets to 2023 when they offer feedback in a post-festival survey to be emailed to ticket holders this week.

It takes around four years to grow a good rock oyster and more than 64,000 were eaten at this year’s festival.