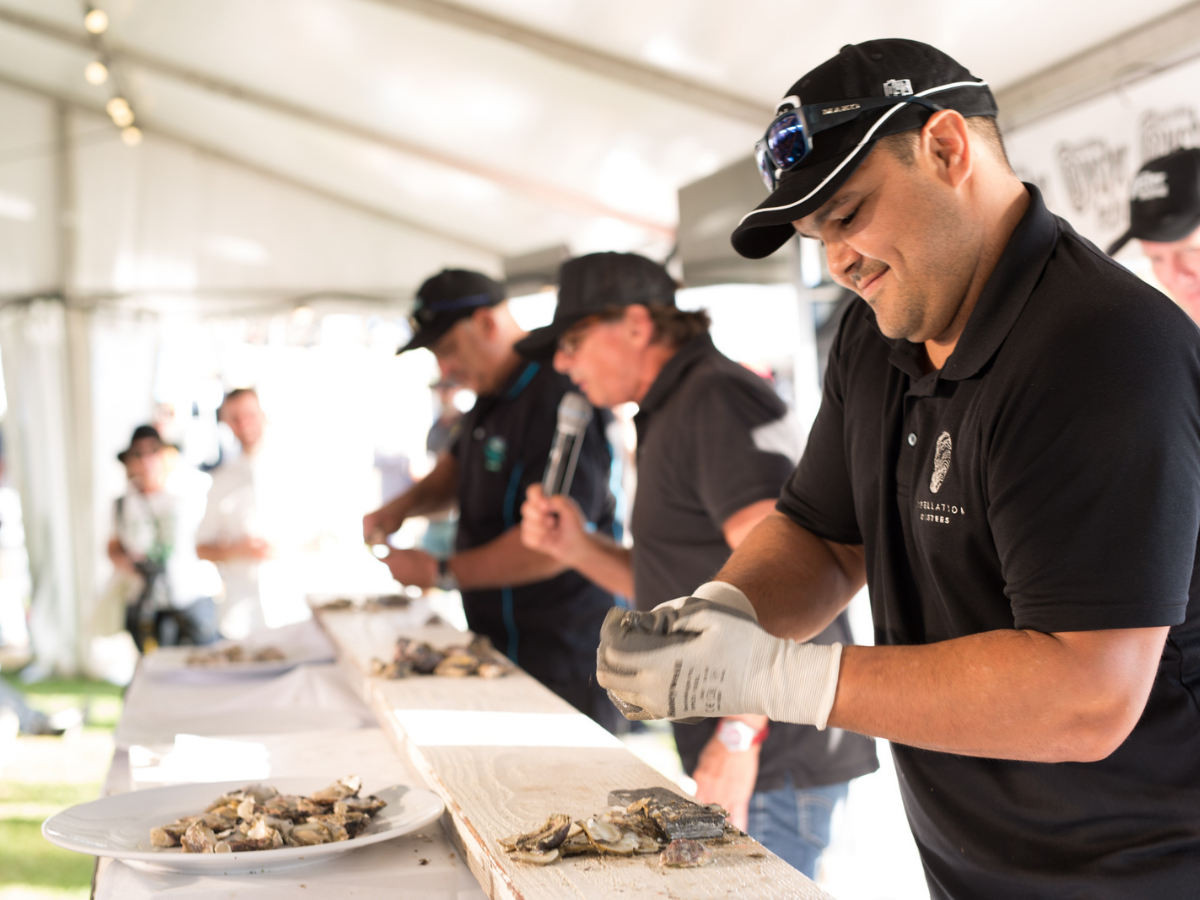 Hot on the heels of the sold-out success of the 2021 Narooma Oyster Festival that attracted more than 6,600 people over the festival weekend, organisers have announced its return for 2022 and an expanded program.

Scheduled for 6 and 7 May 2022, the star of the long running festival is the classic indigenous food of the South Coast, the rock oyster. With the 2021 Long Table Dinner hosted by festival ambassador Paul West selling out online in under four minutes, two new ticketed premium dining experiences will add to festival favourites in 2022 on the grassy foreshore of Wagonga Inlet at Forsters Bay. Plans are underway to expand the site and introduce a seafood long lunch on Saturday and a festival finale cocktail event.

All together, 70,000 oysters were quaffed during the 2021 festival’s 13 hours. 17 farmers from across eight estuaries between Shoalhaven River in the north and Pambula Lake in the south participated. They were complimented by seasonal produce and tasty products from 28 producers and a stellar cast of celebrated chefs led by Bermagui’s Kelly Eastwood, producers and a vibrant arts and music scene.

The family fun included a return to the winner’s circle for Batemans Bay farmer Bernie Connell’s oyster ‘Jack’, who weighed in at 2.71kg claiming the title of Australia’s Biggest Oyster.

This year, during the brief period of prosperity between fires, floods and pandemic lockdowns, the 2021 oyster festival brought a five to one return on investment for the community, with a $2 million injection into the region.

Chair Cath Peachey said the festival uses sophisticated tools to measure its financial impact, including real-time transactions in Narooma from the four major banks.
“The economic impact can’t be underestimated. We saw over the oyster festival weekend that Narooma businesses took nearly half a million dollars more than during surrounding weekends,” she said.
“For visitors, they had already pre-purchased festival tickets and accommodation, so this was additional in-region spending on things like meals, local tours and shopping.”

Cath said this fantastic result was due to the financial and marketing support of the festival partners and sponsors and the commitment of the hundreds of friendly volunteers who give their time.

Importantly, the festival also gave oyster farmers and producers a much needed space to connect with customers and their industry.

“The farmers really enjoy being able to share their love of oysters and that was even more special in this year of uncertainty,” she said. “For farmers who focus on wholesale to metropolitan restaurants, the festival was one of the few markets they were able to reach.”

Of the 6600 patrons in attendance, 72% had travelled from Canberra, Sydney and neighbouring LGA’s for the event, with 60% staying an average of three nights.

“The 2021 Festival was a success on so many levels and given the complexity of navigating the Covid restrictions, I am delighted we were lucky enough to be able to provide this economic and marketing boost to the industry and region,” she said.

If you love oysters and giving back to your community, consider volunteering and joining the festival. In particular the team is seeking volunteers who can assist now with the planning process of managing key festival elements.

“The festival is run by volunteers,” she said. “We have a range of jobs to suit all skill levels and availability and we would really welcome hearing from those who would like to be part of a great community.”

“Our key focus is to attract visitors to the Eurobodalla, and ensure that Narooma and Rock Oyster Country is recognised as producing the best oysters in the world.”

General admission tickets will go on sale on November 26. Premium experiences, including the Long Table Dinner, the Ultimate Oyster Experience, the Oyster Lounge, the Seafood Long Lunch, the Oyster and Champagne cruises and the After Party, will go on sale in early 2022.