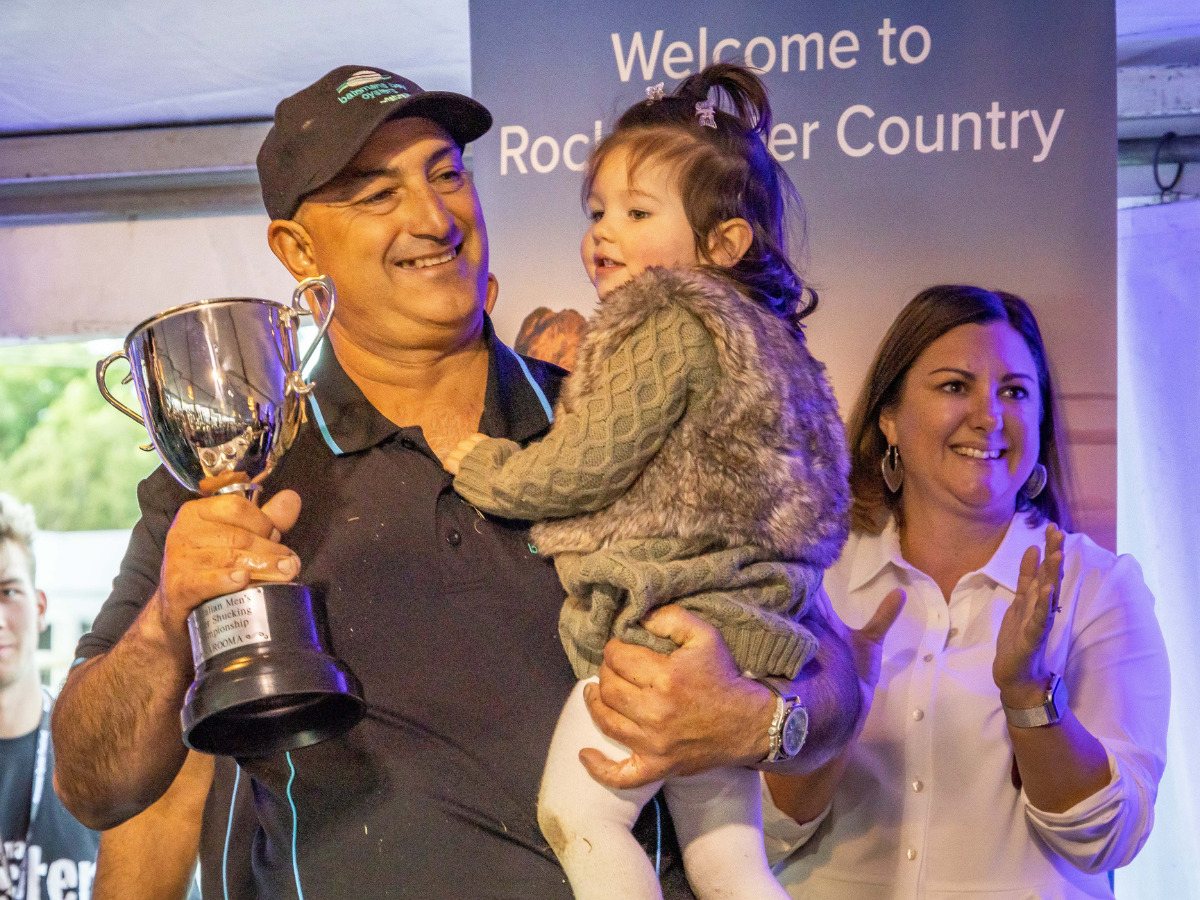 He shucked his first rock oyster at 4, and now this South Coast farmer is headed to the hallowed ground of Galway, Ireland to race the world’s best.

The invitational event is highly competitive, with Yiannaros’ entry following his win at the Narooma Oyster Festival in May, where he shucked 30 rock oysters in just two minutes and 39 seconds to beat a field of Australia’s best.

It’s believed he will be the first Australian to compete in the event in almost 30 years, and he will join a field of champions hailing from the United Kingdom and Europe.

Like Narooma’s competition, it’s part of a famous festival with celebrations and feasts happening around the main event. 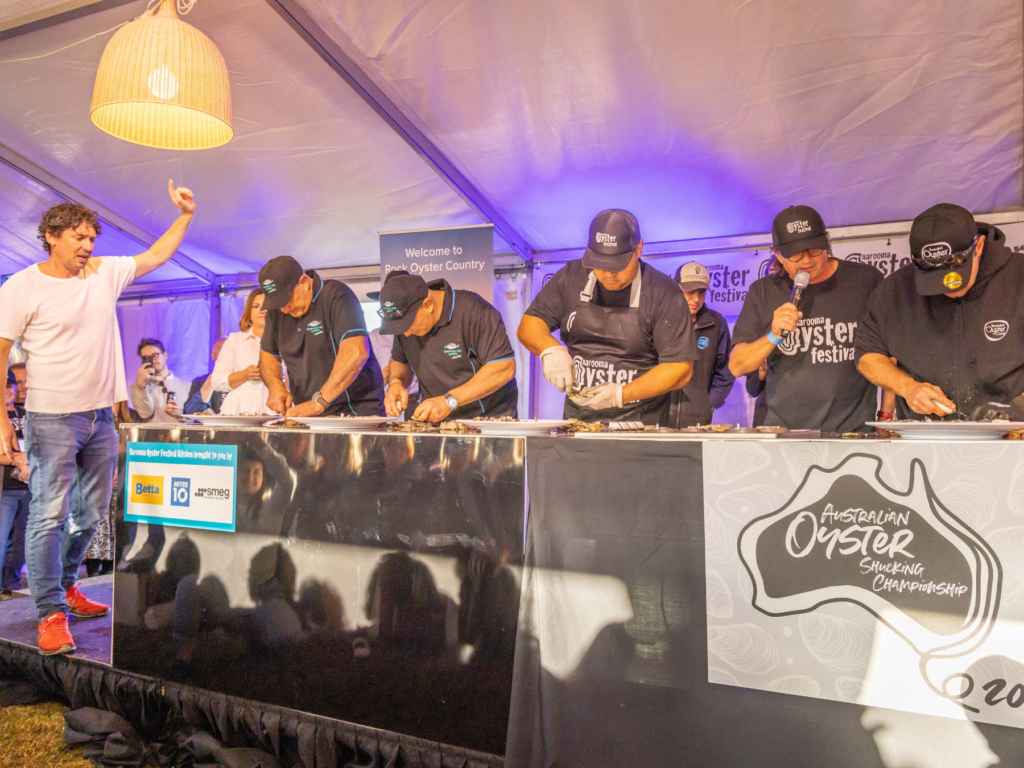 Among them will be Irish champion Stephen Nolan who parachuted into Narooma for the festival this year and went head to head with Yiannaros and Women’s Champion Sally McLean (Jim Wild’s Oysters, Shoalhaven) in a friendly rock oyster shuck-off.

While Yiannaros was convincingly faster than Nolan and McLean, the tides could turn when he is faced with a different species, the Galway Flat.

As far as oysters go, the Rock Oyster and the Galway Flat couldn’t be more different, so Yiannaros has been practising on Australia’s own native flat oyster, the angasi which he has been sourcing from Pip and Dom Boyton at Merimbula Gourmet Oysters.

The Boyton’s have won multiple awards for their oysters and are one of the few angasi growers in Australia.

“There’s only a couple of genes that separate our angasi oysters from the Galway Flat so they are very similar,” Yiannaros said.

“The ones I have been practising on have a really hard shell, which is great, so I’m hoping that when I get there the Galway Flats will be easier to open and we can bring home the goods.”

He has bought a new knife and shaped the blade himself, making it suitable for the longer, flatter oyster he’ll be dealing with in Galway.

“The knife I race with at Narooma doesn’t need a long blade, the rock oyster has a deeper and thicker shell so it really needs to be leveraged open at the hinge,” Yiannaros said.

“I have two techniques that I am comfortable with so when I get there I’ll get to a bench and will be able to refine the technique even further.”

It won’t be just any bench either, the Galway Flats are Ireland’s flagship oyster species and one of their biggest producers, Kelly Oysters, have offered to take Jim under their wing thanks to a long standing friendship with another legendary shucker, Jim Wild of Greenwell Point, Shoalhaven.

Wild is a star both in Galway and Australia, a veteran world champion shucker who won in 1984 and placed third in his last event in 1993. 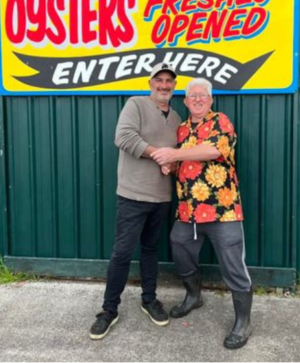 Jim Yiannaros and Jim Wild at the Wild’s farm gate on the Shoalhaven River.

Adored for his oysters, loud shirts and easy hospitality, the farm gate at Greenwell Point on the Shoalhaven River is now run by daughter Sally, a champion grower and shucker in her own right and the “Queen of Shuck” after her own multiple successes at Narooma’s championships.

The two Jims caught up at Greenwell Point last week, with the older passing on valuable tips to the younger.

“Wherever oyster farmers go in the world we always visit other farmers to talk about species and growing and machinery and that sort of thing so it’s really great to have this connection with the Kellys and after some great advice from Jim, I feel a lot less nervous now!” Yiannaros said.

Speed is critical in competitive shucking, but so is presentation. Oysters must be clean and free of grit, neatly placed on the shell and the adductor muscle cut.

Wild was full of praise for Yiannaros, who has been opening oysters on the family farm at Batemans Bay since he was eight.

“Jim is in great form and has a really good chance,” Wild said.

“He’s fast and he is particular, and I think he’ll find those oysters are easier to open than the angasi he has been practising on.”

“They grow a special oyster over there now for the competition, they used to get them off the beds in Galway Bay and you never quite knew what you were going to get.”

“Now they are more uniform and graded to specific size.” 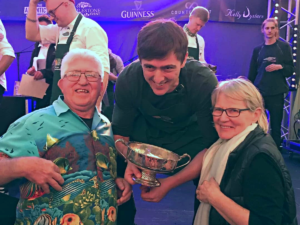 Yiannaros thanked Narooma Rocks team who delivers the Narooma Oyster Festival each year, and Eurobodalla Shire Council for their support for the trip.

“Oyster farmers have been through a lot over the last 15 years, and the last two years especially have been devastating. To see events like the Narooma Oyster Festival going from strength to strength and helping to get Australian oysters on the world stage is some good news for everyone.”

Rock Oysters are indigenous to New South Wales, endemic to a 1500 kilometre stretch of coastline from southern Queensland to Mallacoota on the Victorian border. They contribute more than $150 million to the broader economy annually.